This morning’s infrared satellite view of the remnants of Harvey, at 5:30AM, show some decent organization of the system overnight with persistent convection near the center of the system. You can see the rotation in the lower level clouds to the left (west) of the big yellow and red blob of convection.  I would expect the system to be classified at least a depression later today, and maybe later this morning. We could see it renamed to Tropical Storm (TS) Harvey by this afternoon or evening.  Once classified a depression or TS by the National Hurricane Center (NHC), they will begin advisories.  Expect hurricane hunter aircraft will be flying into the system this morning to check it out as well. Will keep you posted on developments on Facebook and Twitter!

The model graphic below shows one potential track of Harvey as a Tropical Storm approaching the Texas Coastal Bend by Friday with a landfall near Port O’Connor and then a slower, meandering, track North, North Eastward, and then Eastward into Louisiana.  Other potential tracks take it to Corpus or even the Houston area before stalling the system over Southeast Texas, then slowly backing it up into the Gulf again, and sliding it eastward into far South Louisiana.  In either case, this storm looks to bring a deadly flooding threat with it when it approaches either Texas, and/or Louisiana by Friday through Monday with the event lasting potentially through Tuesday or Wednesday of next week – depending on eventual track.  That prolonged duration of torrential tropical rainfall could produce rainfall totals not seen since Tropical Storm Allison which devastated Houston in 2001.

The below model graphic is aligned to the above track projection and shows the accumulated rainfall total along the track.  What you notice immediately is that the rainfall total really stacks up fast once it makes landfall.  A combined effect of friction with land and a stalled front will act to exacerbate rainfall totals with this system.  According to this particular model, widespread 5-8 inch totals can be expected across the coastal plains of Texas and localized amounts of 12-17+ inches are possible if this solution pans out.  5 to 8 inches of rain would cause plenty of problems, especially in the Houston metro area, but 12-17+ inches will lead to deadly flash flooding and significant downstream flooding hazards.  There are some models that project even higher amounts than 18 inches, which would be a TS Allison-like event.

The Weather Prediction Center has updated their rainfall total map through the next 7 days, through Wednesday morning of next week, and they have a very significant rainfall total bulls-eye right over Galveston.  16.5 inches of rainfall with most of SE Texas receiving 7-12 inches of rain.  Most of the rainfall occurs between Saturday and Monday so we’re really looking at the potential for 5-17+ inches of rainfall over a 36 hour period which would be a potentially deadly flooding event for some areas of SE Texas.  If you live in a flood prone area, you should begin making plans to evacuate if future forecasts show this level of rainfall and flooding potential for your area.  If you wait until Saturday night to leave, it may be too late and you could be trapped in your location for the duration of the event.  Don’t put yourself or your family in that situation.  If the area gets more than 20-30 inches of rain, there may be areas that flood that have never flooded before.  So you may think, “we’ve never had a flood, I’m good.”  Fact is, you might be good, but if 30 inches of rain falls in 36-48 hours, you may not be good. You may have an unprecedented situation on your hands, which this entire event looks to be at the moment.

The overnight model runs have not changed all that much from yesterday’s runs.  Still showing a landfall in 72 to 84 hours (Saturday morning), somewhere between Corpus Christi and Houston/Galveston.  Some models stall the system over the water before taking it east into Louisiana.  That’s probably the biggest change from yesterday…an increased chance of the system going in East of Houston/Galveston.  However, the average of the models takes the storm in at Port O’Connor, stalls inland, backs up slightly before sliding east.  This latter solution would correspond to the above rainfall totals of 5-17+ inches for the Houston/Galveston area. 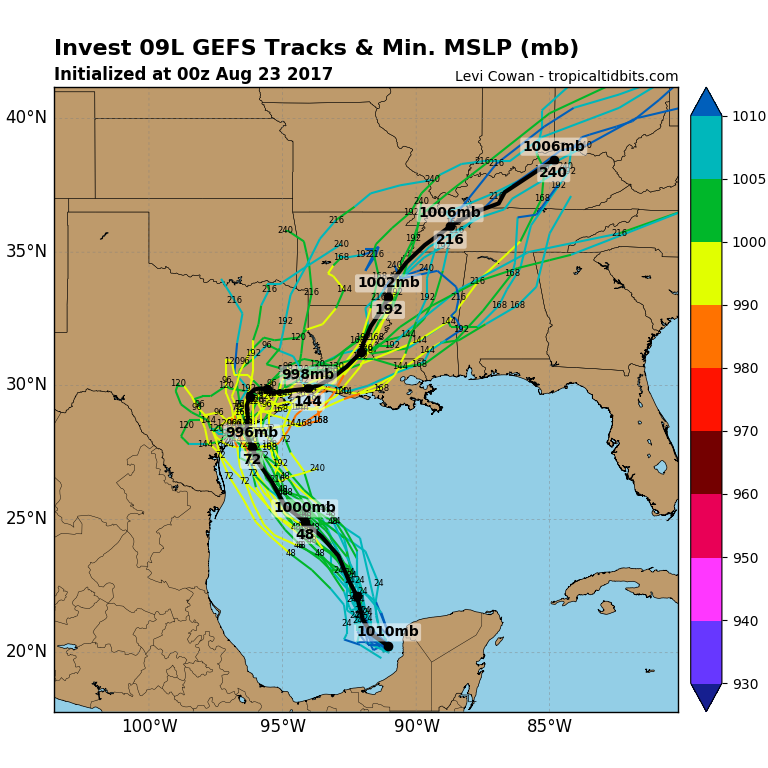 Another set of models show the storm actually doing a loop after landfall.  In other words, the storm makes landfall and then does a very slow loop to the west, back south, and then eastward.  That solution, depending on how far inland the storm tracks before looping will just shift the higher rainfall totals northward away from the coast, but the other aspect is, if the storm goes back over water before sliding eastward, it would re-intensify before it’s second landfall near or in Louisiana.  And depending on how far offshore it was, it could slam the immediate coast with significant rainfall totals and high winds as it re-intensified. 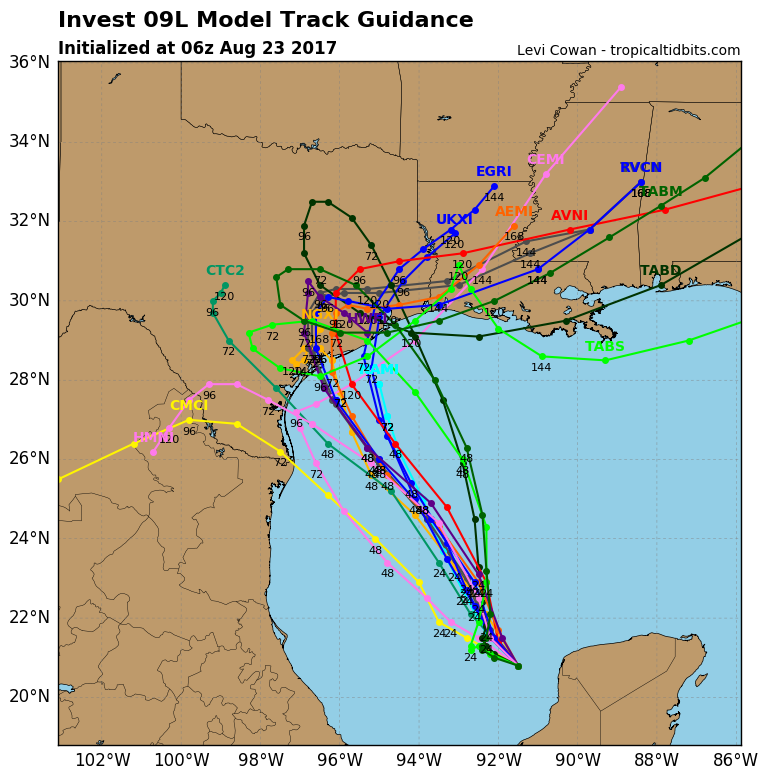 If a Texas Coastal Bend Landfall occurs (near Port O’Connor) , here’s what the Houston/Galveston area can expect…

Beginning Friday, swells begin to arrive on the beach creating rough beach conditions, higher than normal tides, rip currents, and beach erosion.  Some low lying beach access roads or low lying bay roads and areas could see coastal flooding from the elevated tides.  Winds also begin to increase to Tropical Storm force (assuming a fairly strong tropical storm or cat.1 hurricane at landfall).  Squalls begin arriving Friday afternoon and the rain will increase through the night Friday lasting through Monday, with the above scenario.  Depending on wind strength, some power outages could occur, and as the grounds saturate, any wind gusts over 50 mph (seems unlikely given these projections) could topple trees. Extend the rainfall out to Tuesday or Wednesday if the storm does a loop.  Flooding threat is at its maximum Saturday afternoon through Sunday, with the above scenario.  Once the system slides east, north winds and hot humid conditions will be expected for the flooding recovery and relief efforts.

Wave forecasts show waves as high as 12 feet approaching the coast where the storm makes landfall.  With a Port O’Connor landfall, waves of 5-8 feet look likely for Galveston on Saturday.  Again, swells will be arriving on Friday.  The conditions will be rough and dangerous.  However, for the surfers, north winds on the back side of the storm could make for decent surfing…be aware of runoff and bacteria levels though! 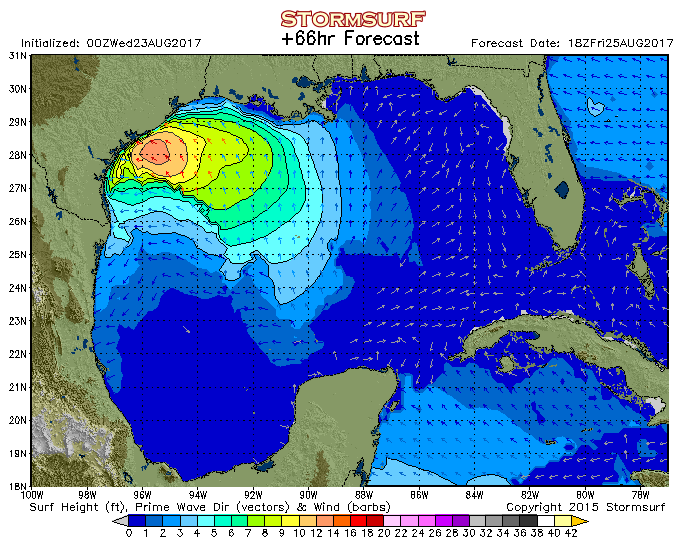 Stay tuned to us as well as the National Hurricane Center, and National Weather Service office for more information as this situation develops!